DENMAC is proud to announce we are now the exclusive Western Australian supplier of MetecnoKasset® AS5113 compliant fire protection cladding.

As market leaders in façade projects, we understand the importance of visual aesthetics, sustainability, stability and quality, as well as the most important factor – safety.

The revolutionary new MetecnoKasset insulated façade panelling system is new to the Australian property market and is known for its ability to drastically reduce installation times for builders and developers. The curtain wall or window wall system is also seen as a faster and more economical option to tilt panels alongside a series of additional safety benefits and thermal protection. A quick look at the MetecnoKasset product page outlines a series of benefits which align with efficiency, safety, durability and quality within the market.

As Western Australia’s only supplier of this exclusive new Metecno PIR product range, the team here at DENMAC are extremely excited at the future possibilities within the industry. 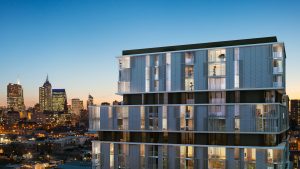 MetecnoKasset is designed for optimum efficiency with the ability to build, clad and insulate at the same time, reducing installation time by up to 50%. Presenting a significant advantage to builders to lower on-site costs, the system is also highly durable, making it easy to install thanks to lightweight panels and a narrow wall profile, which can be installed from inside buildings and over handrails, removing the need for on-site costs such as perimeter scaffolding.

A recent example of this includes the Yorkshire Brewery Apartments project in Collingwood (Victoria), where the site presented a series of accessibility issues. With limitations on space for cranes and scaffolding, the MetecnoKasset system was introduced to facilitate the curtain wall and panel installations, leading to the builder progressing at a rate of two floors each week on average.

Whilst on site, Cladding Systems Project Manager (Damian Hogan) was highly complimentary of the new system, labelling its benefits as ‘outstanding’. He commented as follows,

“Due to the restricted access and a number of other limitations on site, we found the speed and efficiency of the product outstanding. The new lightweight system together with a traditional installation method significantly reduced the labour costing and program times without relying on the site crane other than floor loading.”

This revolutionary system is made up of a Polyisocyanurate (PIR) fire-retarded core with unique thermal properties, making it one of the leading fire-resistant façade systems on the market, in particular for high rise apartments. This is due to MetecnoKasset’s full compliance with AS5113 regulations which test for external wall and fire spread requirements, fire propagation testing and classification of external walls of buildings – truly making it a product you can trust.

Manufactured here in Australia and originating from the renowned Metecno PIR suite of products, the company’s General Manager, Colin Richman, described the new insulated façade panelling system as having,

“…the highest fire safety benchmark of the Australian built environment.”  He went on to add, “This is truly innovative technology with its durable and versatile design can reduce installation time by up to 50 per cent and has already saved one client over $1 million on a single project.” 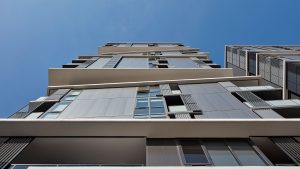 As of March 2018, a new stringent set of Australian safety standards were introduced to the property market with a firm focus on fire safety in light of disasters such as the Grenfell Tower Fire which took the lives of 72 Londoners in 2017.

It took almost a year for MetecnoKasset to be assessed and verified, shortly thereafter becoming the first façade system to pass all criteria from the new Australian Standard AS5113:2016 Fire Propagation for Exterior Walls. Now recognised as a fully tested and approved curtain wall system, Colin Richman (General Manager of Metenco) expects this to be a pivotal factor in demand from Australian architects, builders and developers, adding “MetecnoKasset meets AS5113’s more stringent criteria including for falling debris and radiant heat that are not found in European or American standards.”

Fire Safety Is The Talk Of The Town

Whilst fire safety has always been of the highest priority for all fresh builds in Australia, international, state and local news tabloids continue to expose stories and scenarios of combustible at-risk cladding been used. It’s become an all-too-common mainstream discussion with the Building Commission introducing a state-wide cladding audit in 2017 to assess prominent buildings throughout Perth.

When interviewed in a recent 6PR interview, Commerce Minister, John Quigley, revealed he was committed to introducing new laws which would give more power to the state’s building watchdog to enforce owners to remove combustible cladding from at risk properties and structures.

A recent WA Today article outlined that the Western Australian Building Commission have identified 12 private buildings and 19 public buildings which require urgent attention, with more in the pipeline. Some of which include popular public locations such as educational institutions; Curtin, Murdoch and UWA, alongside the Department of Health, VenuesWest and (ironically) the Department of Fire and Emergency Services.

Just this week, King Edward Memorial Hospital was also reportedly given the green light to proceed with a $15.1 million upgrade its facilities thanks to federal government funding. The face lift will address current at-risk cladding on the hospital’s facade, as well as upgrades to several lifts, fire and alarm systems, as well as structural reinforcements.

Builders, developers and architects now have the opportunity to work with a façade system that not only provides increased efficiencies and on-site quality, but one which promises premium fire safety assurances thanks to its Polyisocyanurate fire-retardant core and advanced thermal properties. It can be seen as a timely, revolutionary and overdue update to the industry which promises to raise the bar to fresh quality standards within the built Australian market.

As Western Australia’s exclusive supplier of the AS5113 approved MetecnoKasset system, DENMAC looks forward to being able to contribute to the increased safety of WA’s public and private infrastructure.

We encourage you to either browse our product page or contact us regarding all enquiries and orders.